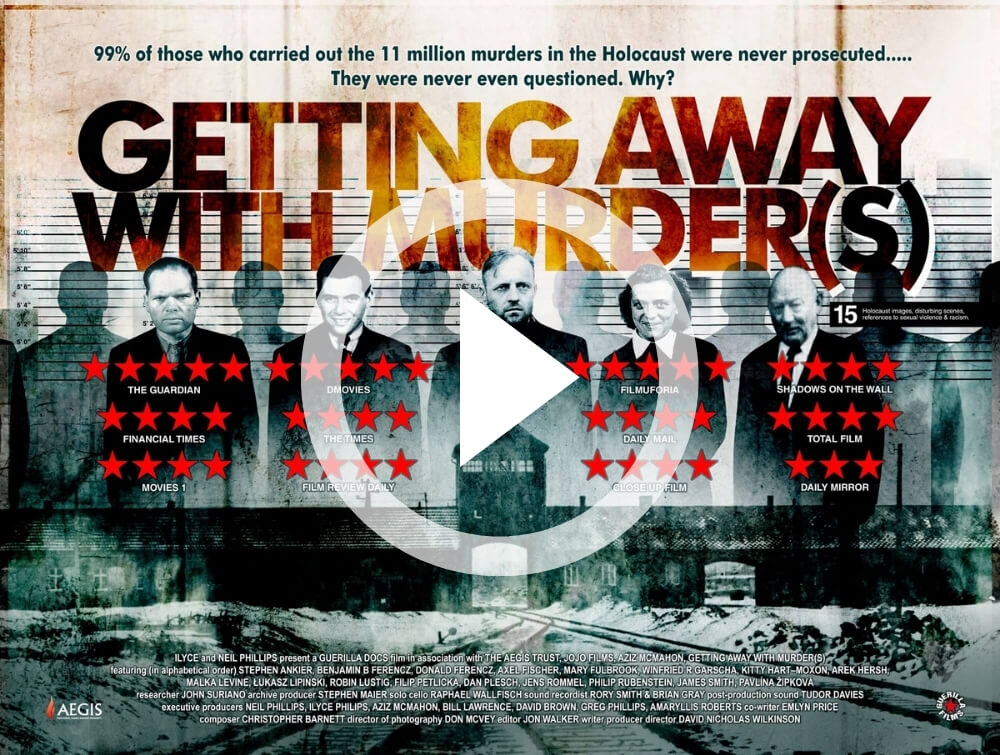 99% of the people who committed murders in the Holocaust were never prosecuted or even questioned. Why?

Released in UK cinemas as a co-production with the Aegis Trust on the 75th anniversary of the Nuremberg Trials, David Wilkinson’s feature documentary ’Getting Away with Murder(s)’ digs deep to find the answers. It’s an illuminating, absorbing, important journey.

Click here to join a screening and panel discussion with the director in Nottingham, home of the Aegis Trust, Wednesday October 13th.

‘Getting Away with Murder(s)’ takes us all over the UK (including to the National Holocaust Centre, birthplace of Aegis), then to Ireland, the USA, the killing fields of Lithuania and Latvia, the Czech Republic, Poland, Austria, France and Germany.

“I followed Ronald Harwood’s No.1 screenwriting rule; ‘be true to the truth’,” says Wilkinson, quoting his late friend the scriptwriter of ‘The Pianist’, to whom the film is dedicated. “That, for me, meant a film lasting 175 minutes.”

The run time is nothing compared to the gestation period. It took 18 years for ‘Getting Away with Murder(s)’ to go from a burning question in Wilkinson’s heart to a feature doc on cinema screens; a long time for such a seasoned documentary maker.

Year on year, Wilkinson would pitch the idea at industry festivals, only to get push-back. “I don’t understand why you’re so passionate about this subject – you’re not Jewish,” one TV commissioning editor told him. “Don’t you think the Jews have had enough coverage regarding the Holocaust?” another senior UK broadcast executive asked.

Then, in 2018, he encountered more visceral antisemitism.

On a London bus he was confronted by a fellow passenger who mistook him for a Jew. “He came to berate me for what I was doing to the Palestinians. He was a big man, probably a boxer or body builder. The confrontation was intense, aggressive and frightening; emotions I rarely feel,” says Wilkinson. “What shocked me; it was a crowded bus and not one person said anything…. I never thought a bus full of Brits would turn a blind eye to such a bigoted verbal assault. That night I started pre-production on ’Getting Away with Murder(s).”

On Wednesday 13th October, ’Getting Away With Murder(s)’ will screen at the Broadway Cinema in Nottingham. It will be followed by a panel discussion hosted by Gary Mills, Associate Professor of History Education at The University of Nottingham, featuring David Wilkinson with Holocaust survivor Malka Levine and Aegis CEO Dr James Smith.

“Impunity for past crimes gives courage to would-be perpetrators,” says Smith. “If we don’t challenge the reasons why over 99% of Nazi perpetrators evaded justice for crimes of such gravity, we lay ourselves open to the repetition of mass atrocities in the future. For anyone who believes there should be accountability for the most egregious crimes that humans can commit, ‘Getting Away with Murder(s)’ is essential viewing.”

Critics are giving the film 4-star and 5-star reviews.

“An epic documentary investigation … a sombre, valuable film” (The Guardian)

“This is compelling and provocative filmmaking” (The Times)

‘Getting Away with Murder(s)’ is not yet available outside the UK, but watch this space.

If you are unable to attend a screening of the film, but would like to support the peacebuilding work of the Aegis Trust, please click here to contribute.

Thank you for your support.