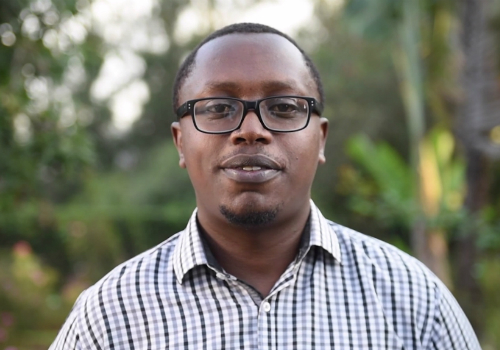 Lambert KANAMUGIRE is a Peace Education Specialist. He was born in May 1982 in Rwanda. He did his primary, studies in Rwanda, Southern Province. In high school, he studied literature of English, French, Kiswahili and Kinyarwanda. At the National University of Rwanda (NUR), Huye Campus, he studied the Sciences of Education in the option of teaching French and English in high schools. He obtained from the same University a bachelor’s degree in Translating and Interpreting languages of English-French and Kinyarwanda. With regard to his professional career, Lambert had worked as an English and Kiswahili teacher in a high school for 2 months. From 2008, he was recruited by Aegis Trust as a visitors’ tour guide at the Kigali Genocide Memorial until December 2010, and later served as a Head of the Visitors’ Guides Department from January 2011 to December 2012. After benefiting from an intensive training on the peace education methodological approaches, he served as a Coordinator of the Onsite Education Program at the Kigali Genocide Memorial from January 2013 to April 2016. In May 2016, he was appointed by Aegis Trust to Bangui, Central African Republic, to work as an Education Specialist in the project named CIPP (Central African Interfaith Peace Building Partnership), where Aegis Trust is part the project’s consortium. He played a key role in developing the educational tools for the Project’s non-formal peace education program. He is currently working on training the project’s Central African peace educators to uplift them to the level of being able to train trainers in peace education.