Peacebuilding: a gift for the Central African Republic

In the video above, Aegis CEO Dr James Smith introduces ‘Reverse the Ramraid’ – a campaign you can support to save lives through peace education with the Aegis Trust in the Central African Republic. 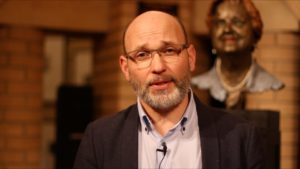 The film opens with Alain Lazaret, Aegis’ Representative in CAR, discussing some of the extraordinary challenges peace builders can face. Thanks to the courage and commitment of Alain and his colleagues, supporting this campaign with as little as £5 (or $6) can save lives.

With friends and colleagues, James will be running in the Newark Showground Christmas Challenge on December 17th to raise funds for this campaign. Click here to sponsor or join his fundraising team.

‘Reverse the Ramraid’ was launched by White Rose, the recycled fashion chain which supports the Aegis Trust, to raise the money lost by White Rose due to a ramraid on one of its stores, sending every penny directly to support peace education in CAR.

A full transcript of the video follows. 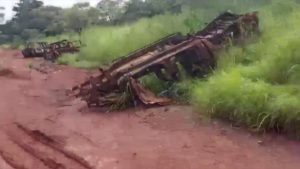 In November 2022, Alain Lazaret passed the site where his convoy was ambushed by rebels 18 months earlier

ALAIN: “They were pointing their guns at us, had us sit on the grass and then lie down, and they were threatening us, “We are going to kill” – it came all back, like a kind of vivid memory.”

JAMES: Alain Lazaret is the Aegis Trust’s representative in the Central African Republic, where we conduct peace education programmes in communities torn apart by intercommunal violence.

18 months ago, after running workshops in a remote area, Alain’s convoy was ambushed by rebels. In November this year, work in the area took him back through the spot where that attack happened.

“Hadn’t God intervened then we would have all been killed. Two weeks later, they stopped another convoy. They killed all of them and burned all the cars. They

killed almost like 46 people. So … we were very lucky to escape that kind of death.

“So yeah, it’s risky, but it’s worth doing it because when we see what happens, there is impact after it.” 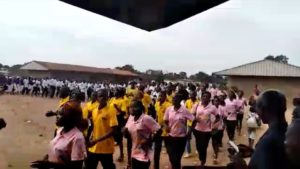 JAMES: With insecurity once again rising in the country, governments around the World are cutting back on international development spending just at the time when investment in peace education is most urgently needed.

The Central African Republic can be a challenging place to conduct peace education, but our colleagues there do so, and continue to do so, because it saves lives.

Kadjidjia was a law student in Bangui, the capital city, when her studies were cut short by the Seleka takeover in 2013. Widowed by Seleka militia, she was then detained, interrogated and beaten by opposing Anti-Balaka militia.

Kadjidjia knew who had betrayed her to the Anti-Balaka militia. By the time she joined our Aegis Trust peace education workshops, she already had grenades and an assault rifle ready for a revenge attack.

After going through the trauma healing and the forgiveness exercise, however, she gave up her desire for revenge. “That night I was able to sleep again,” she says. She turned in her weapons, went to the man she had intended to kill, and forgave him.

Today in the Central African Republic, countless young people like Kadjidjia need the knowledge and the skills that peace education will give them to help them work together for peace, instead of picking up weapons to kill each other.

This makes support for peace education through social enterprise, like White Rose, the recycled fashion chain, all the more essential.

When one of the White Rose stores in Sheffield was recently ram-raided, it wasn’t just theft; this was harming life-saving work in the Central African Republic.

Launched in November, ‘Reverse the Ramraid’ is a campaign to raise the money lost by White Rose due to the raid, sending all of it straight to the Central African Republic to support peace education.

Here’s how Alain reacted when we gave him the good news that the campaign has already raised enough, thanks to your generosity, to fund a two-day workshop for 300 young people in Bangui.

After taking part in an Aegis peace education workshop, Kadjidjia gave up weapons and plans for a revenge attack

JAMES: Thanks to the courage and commitment of peace builders like Alain and his colleagues, as little as five pounds, or six dollars, is enough to fund one student through a life-changing, life-saving experience like Kadjidjia’s.

Now isn’t that a gift worth giving?